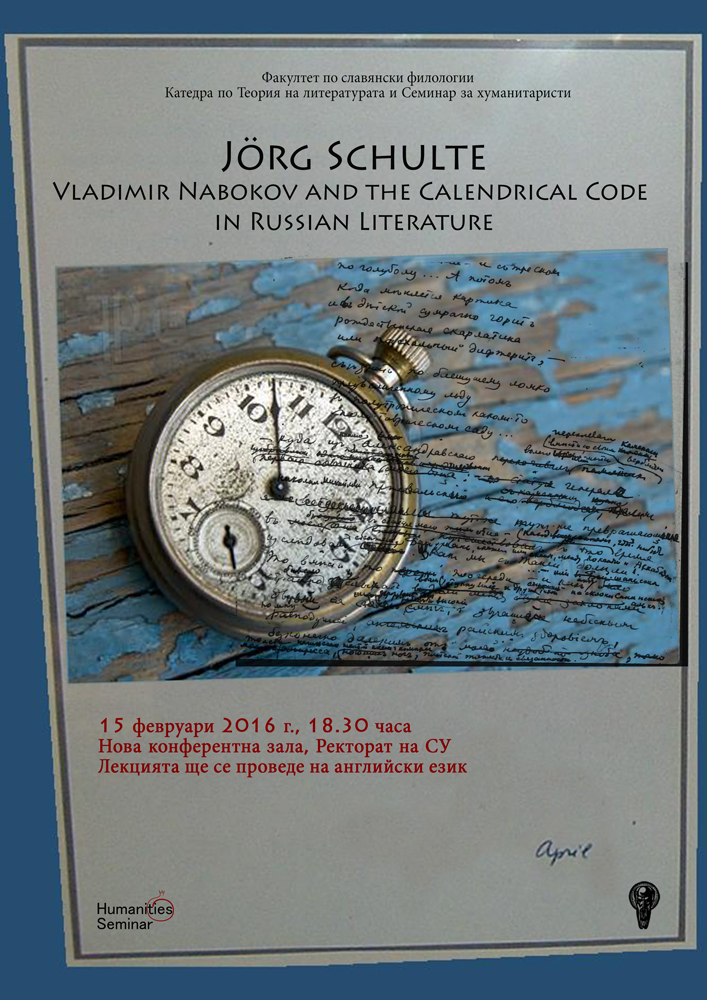 Vladimir Nabokov and the Calendrical Code

Many of Vladimir Nabokov’s novels contain calendrical motives, some of them offer calendrical riddles. These riddles can be solved through a combination of historical data and events mentioned in the novel and literary allusions. Creating a “calendrical code” Nabokov continues a tradition in Russian literature that reaches back to Pushkin and Gogol’ and was continued by Chekhov and Esenin. Referring to Nabokov’s Russian novels Mary, Glory and The Gift as well as to his first English novel The Real Life of Sebastian Knight the lecture attempts to reveal some invisible links between different periods of Russian culture.

Jörg Schulte has studied Slavonic literatures in Odessa, London and Hamburg and written his PhD on the influence of rabbinical sources on the works of Isaac Babel, Bruno Schulz and Danilo Kiš. He was a research fellow at the Centre for Studies on the Classical Tradition in Poland and Eastern Europe (OBTA) at the University of Warsaw and Aby-Warburg-Fellow at The Warburg Institute in London with a project on the Polish Renaissance poet Jan Kochanowski. He has also worked as a lecturer at the College of Inter-Faculty Individual Studies in the Humanities (College MISH) in Warsaw and as a network coordinator for the project ‘Russian Jewish Cultural Continuity in the Diaspora’ based at the University of Bath. He has been teaching Russian and Polish literature at the University of Hamburg. During the academic year 2010/11, he was a visiting professor at the Institute of Interdisciplinary Studies ‘Artes Liberales’ at the University of Warsaw. His project dedicated to the life and work of the Hebrew poet Saul Tchernichowsky (1875-1943) has been conducted at the Department of Hebrew and Jewish Studies at University College London (UCL) and the Department of General and Comparative Literature of the Hebrew University from 2011 until 2013. In 2014, he has been appointed as chair of Slavonic Literature at the Institute of Slavonic Studies at the University of Cologne. Jörg Schulte’s research interests include the survival of the classical tradition in Hebrew, Russian, Polish and Serbian/Croatian / Bosnian literature, Jewish cultures in Central and Eastern Europe as well as the history of poetics, and the history of prosody.